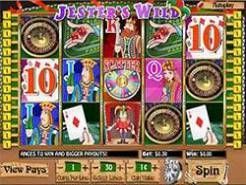 Play Now
Jester's Wild is a game about fun and getting the lucky card when playing card games or even one of the other casino games that feature as part of the symbols in this very colorful and busy slots game. There are five reels and thirty paylines in this game that includes free spins and a chance to gamble winnings by spinning a wheel. Players may try out the game in fun mode before placing real money bets, there is also an auto play feature when the player wants to preset the number of spins the game runs for consecutively. Betting option start at $0.01 and reach as high as $5 giving a maximum betting option of $450.

The jester is naturally the wild symbol and he appears on all the reels where he can substitute for other symbols on the screen and complete winning payouts in this way. On his own the jester is a very high paying symbol giving players 4000 coins when five appear on an active payline together, four award the player 400 coins and three award the player 50 coins. If the jester appears on the middle reel the player is treated to the bonus game. This bonus game turns up to four different symbols into wilds giving a total of 5 wilds on the screen for a re-spin.

Exciting Free Spins and a Chance to Spin Up the Winnings

The colorful wheel is the scatter symbol and this is the trigger for the free spins games. Three and more of the scatter wheels on screen takes players to the wheel where their first spin will reveal a multiplier of up to 6x and the second spin of the wheel will reveal the number of free spins that the player has won, he can win up to 32 free spins. At the end of any winning spin the player can opt for the gamble feature that is called the spin up your win gamble. Players that choose this feature and invited to spin a wheel and where it comes to rest will award the player with a multiplier of up to 5x. This game is filled with colorful busy symbols and once past these, the player is able to enjoy the game and reap the benefits of the Wild Jester.
Play Now