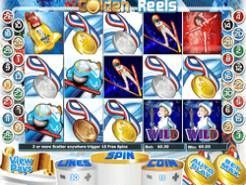 Play Now
Golden Reels slots is a game centered around the winter Olympics and all of the exciting sports that it includes. There are bobsledders, skaters, skiers, hockey players and ski jumpers that fill the screens together with the bronze silver and gold medals that they can win. Players may try out this five reel thirty payline slots game for fun before placing real money bets. When ready for real money betting the player can choose coin sizes that start at $0.01 and are as high as $10 with the maximum bet being $300 per spin. This game includes a wild symbol and a scatter bonus symbol with a chance to win free spins and re-trigger more. There is an auto play option for players that want to preset the number of spins that the game runs for consecutively.