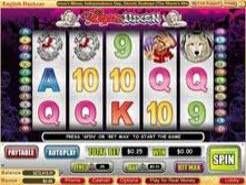 Play Now
The Vampire Vixen will trick you with her beauty and her enticing manner but beware, she loves not just you but your blood and will suck it all out. Luckily this game is only on the screen and players can enjoy the game without fear and at the same time benefit from some fabulous winning options. There are five reels and twenty five paylines to this game that includes a wild symbol and a scatter with free spins that can be won at any time in the fun mode or the real money mode. Naturally the real money mode is the best way to play this game that allows players to place up to 10 coins per line with coins sizes ranging from $0.01 up to $10. There is also an auto play option for players that want to preset the number of spins each game runs for consecutively. At any point, the player can stop the auto play and revert to manually hitting the spin button.

The Important Vixen and Her Haunted House