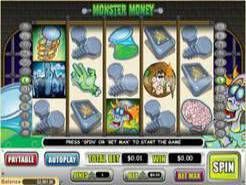 Play Now
Monster Money feeds on money and not much else. As a monster he is not that scary and he is rather cute. The Monster Money was created by the mad professor in his lab and players also see some of the tools that the are used in the lab. There are five reels and twenty five paylines in this extremely colorful slots game that includes a wild symbol, a scatters and a bonus game. Players may try out the game for practice before placing real money bets. There is also an auto play option that allows the player to preset the number of spins the game runs for consecutively. At any point the player can stop the auto play and continue manually placing bets using his chosen coin size that ranges from $0.01 up to $10 with a maximum bet of $250 per spin. The monster is wild and he appears on all the reels where he can substitute for other symbols and complete winning paylines. On his own the monster awards players very high payouts of up to 5000 coins when five of the wild monsters appear on the screen. Four of the wild monsters award the player 1500 coins, three award the player 100 coins and two award the player 10 coins.