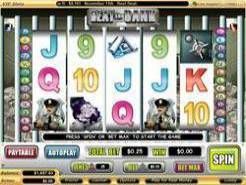 Play Now
Thieves and police are just part of the plot in this colorful and action packed slots game where the thieves are raiding the bank for the best payouts they can get and the police are constantly on their trail. Players may try out this game for fun before placing real money bets, giving them a chance to get to know the game and understand the workings of the bonus options. There is an auto play function for players that want to preset the number of spins the game runs for consecutively and at any point this can be changed to manually hitting the spin button.

Pick the Right Vault and Double Your Winnings

The bonus beat the bank game is activated when three or more of the vaults appear on the screen. In this case the player is taken to a new screen where he is invited to pick one of two vaults presented to him. If the vaults he picks has money inside of hit, his winnings are doubled, if not the bonus game ends. The player can continue picking the vaults until he loses or he reaches the limit of 1024x the bet placed. Stealing is not a good thing but in this game it can definitely be positive and give the player some great payouts.
Play Now