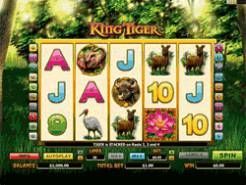 Play Now
Some would argue that the lion is the king of the jungle whereas others argue that it is the Tiger with his speed and stealth. The King Tiger is fierce and takes no prisoners, implying that if you don't get away you die. This slots game shows a nicer side to the King Tiger where he can rest and enjoy the delights of the pretty jungle with its green trees and fruits. Players will come across other jungle creatures in this game, including an elephant, a buffalo, and a heron. There are five reels and twenty five paylines to this game that allows players to choose a variety of coin sizes according to their budget. The player can choose from $0.01 up to $10 per spin giving a maximum bet of $250 in total for any spin.

The tiger is wild and appears on reels 2, 3 and 4 where he can substitute for other symbols and complete winning paylines in this way. There is also a pretty scatter symbol noted by the pink flower. The scatter awards players multiplying payouts of up to 100x the coin bet placed for five of the scatters appearing on the screen. Four award the player 10x, three award the player 5x and two award the player 2x. In addition players receive 10 free spins when three or more appear on the screen. During the free spins all winnings are tripled and the player may be lucky enough to trigger more free spins that are added to the remaining free spins. This trip to the jungle is delightful and enjoyable and great fun to play.
Play Now